Chhat puja, also known as Surya Shashti is a famous Hindu festival that is celebrated each year with great enthusiasm and devotion in the northern parts of India. It is a very ancient tradition and it has been performed in India for thousands of years. It is celebrated to pay homage to Lord Surya, the Sun, and express gratitude for the vital energy it provides to sustain life on Earth. Chhati maiya or Usha, wife of Lord Surya, is also worshipped on the day. Usha means the dawn and people worship her to bless their lives with happiness, wisdom, and prosperity. It is believed that the great warrior in the famous epic of Mahabharata, called Karna, who is the son of Lord Surya himself, began this puja. It is well-known that Draupadi and Pandavas performed chhat puja in order to solve their problems and regain their kingdom. It is also believed that Lord Rama and Sita kept a fast and worshipped Lord Surya during their coronation celebrations. This later became popular as chhat puja and people began to celebrate the day every year. In ancient times, kings invited purohits to perform chhat puja to worship the Sun in order to gain power and wisdom.

On the first day, people take bath early in the morning in the holy water of Ganga. Only one meal called kaddu-bhat, prepared in bronze or earthen pots by burning mango wood, is consumed. On the second day, a day-long fast is kept which is broken after sunset after worshipping the Earth. After this, 36 hours fast is kept without even consuming water. On the third night, lamps of clay covered with five sugarcane sticks, signifying the panch tattvas, are lit. On the last day, families offer their homage to Lord Surya on the banks of Ganga and break the fast by offering Chhat Prasad. The Scientific Importance of Chhat Puja 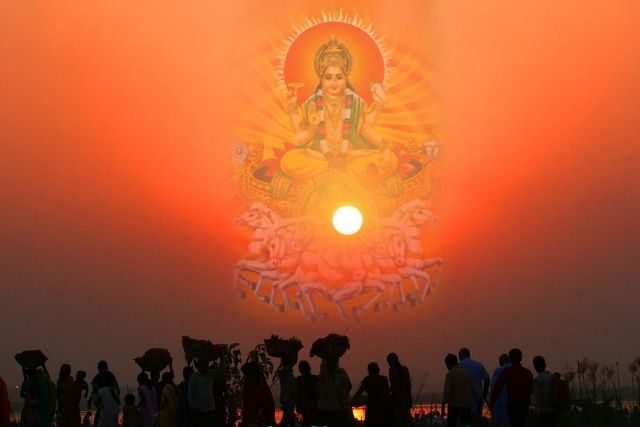 Behind every festival or tradition, there is some deeper meaning and truth. It is important to understand it in order to fully grasp the true significance of these traditions, instead of following them mechanically. Chhat puja is typically performed during the sunrise and sunset, which are very important periods for the human body to get solar energy safely. This energizes the body and provides vitality to all its organs. It also has a detoxifying effect on the body and a soothing effect on the mind. The energy of the Sun is life-giving and it removes negativity from the mind.

As with any other festivals in Hinduism, Chhat Puja has a great historical as well as the scientific basis. It is a means to make people aware of the great importance of the Sun in our life. It is also to make them aware of the health benefits of solar energy. People celebrate this festival with great enthusiasm and fervor in different parts of the country and enjoy the blessings and benefits of the worship of Lord Surya. With its real significance in mind, people can get the true essence of the festival and get the real benefits along with the joy of the celebration.

5 WAYS TO CELEBRATE AN ECO-FRIENDLY DIWALI How to Make Mehndi Darker and Long Lasting?