How to Celebrate HOLI?

“Reach out with the colors of joy
Forgive and Forget
Let the joy of being loved
And giving love through vibrant colors take over
Re-discover Peace and Happiness
Celebrate the Holi!!!!”

Holi is one of the Indian festivals associated with colors and love. It is widely celebrated across the nation during the spring season. Spraying colors, dancing on traditional Holi songs with musical drum beats and wild processions are a common sight on this day. Holi festival is the symbol of bonding. It brings friends, family, and neighbors together to forget everything and rejoice in a carefree manner. The festival is associated with various legends but the most popular among them is the tale of Holika. Holi is celebrated as the festival of the victory of good over evil. It is the festival of equality – no one is rich or poor. In India, Holi is celebrated in different areas, sections, and religions differently. In North India, the day before Holi, ‘Holika Dahan’ is celebrated. On this day, logs of wood are collected and large bonfires are lit to burn the evil spirit. According to the Hindu mythology, the ashes left after ‘Holika Dahan’ are sanctified and people rub it on their foreheads, which is believed to guard them against all evil forces.

In South India, people worship the love god ‘Kamadeva’. It is said that Kamadeva shot a love arrow on Lord Shiva to break his meditation for ‘Lok Kalyan’ (people welfare). But Lord Shiva got angry and burned Kamadeva. This festival is celebrated in the remembrance of his sacrifice.

Holi played in Mathura is very famous all over the world. This festival here goes on for 16 days and is played with flowers at Baankey Bihari’s Temple, the temple of Lord Krishna. Lathmaar Holi is also very popular, especially played in Barsana and Nandgaon. According to the traditions followed by the people of Barsana and Nandgaon, men try to throw colors and water on the women. Women have a stick in their hands and beat the men to safeguard themselves. It is very interesting to see this unique way of celebrating this festival.

Maharashtra, the west part of India also celebrates Holi in its own way. In Maharashtra, Holi is commonly known as Rangpanchmi. They follow a tradition of ‘Breaking the Pot’. Trained groups make a human pyramid to rise and break the pot of buttermilk or yogurt hung high in the street.

How is Holi Celebrated The spirit of Holi can’t be ignored. It is a carefree festival renowned with joy and happiness. The spirit of Holi is color and love. On the day of Holi, people start playing Holi with their friends, colleagues, and strangers by smearing colors on them. People roaming on the roads, streets and shout “Holi hai! Holi hai!” People start chasing each other and throw the gulal (dry color) and water on their faces. Kids play with special Holi toys called ‘Pichkari’ (water gun) and water-filled balloons. On this day, groups of people gather on the street, going from place to place, play with colors and dance on music and sometimes even play musical instruments.

On this day, Markets are flooded with heaps of ‘Gulal’ (dry colors) and watercolors. They are arranged in the shape of a pyramid. The colors are very vibrant and look nice. It seems life is full of colors. But be careful and do not purchase the harmful colors that can damage your skin. In modern days, sandalwood powder and herbal colors are better to play Holi with. Herbal colors are good for our skin. These are very easy to make at home. Some techniques that can be used are- After a day of play with colors, people take bath, clean-up their bodies and dress up with new clothes in the evening and visit their friends and relatives to greet them and exchange sweets. Holi is also a festival of making a new beginning in your life by forgetting the old enemies. Some popular Holi gifts are Dry fruits, Sweets, Home decoration items, Greeting Cards, Idols of Radha Krishna and many more. 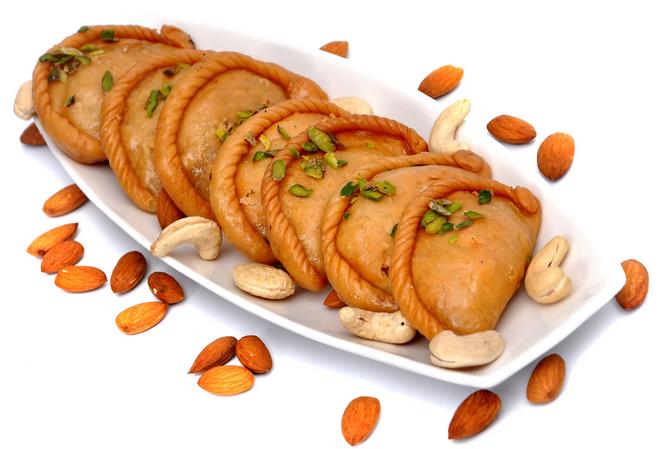 Sweets are the most essential part of Holi. People make some delicious food items at their homes to make this occasion very special. They prepare chaats including dahi bhalle, gol gappe, papri, pakore, Aaloo tikki, etc. Some sweet dishes you can include in your recipe menu are-

If anybody talks about Holi, the first thing that comes to our mind is the popular Hindi Holi songs. Here are some songs you can play on your next Holi party:

All these filmy songs on Holi show how Bollywood has contributed a lot to our cultural festivities in a very delightful manner. 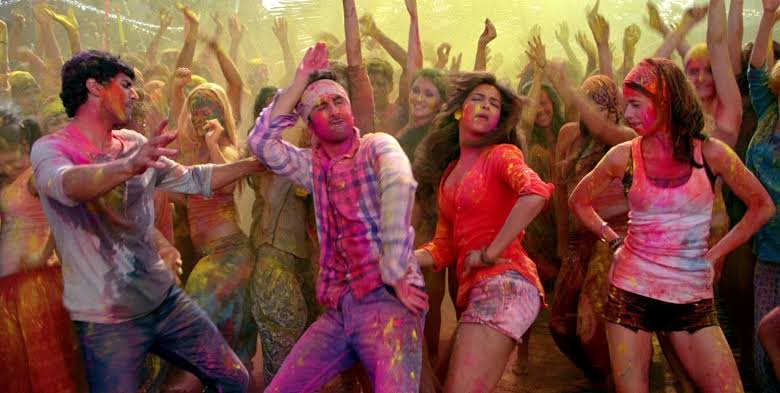 Holi and Bollywood have a long-standing history. The Film Industry never forgets to set a stage on fire every time by producing new songs on Holi. In actual practice also, Bollywood becomes a lively place for Holi celebrations.

It’s not just the off-camera Holi parties that are part of Bollywood, but the festival has also played an integral part in several movies as well. There are many Hindi movies that carry the essence of the festival. Many movies have been based on the festival of Holi, such as ‘Bhakt Prahlad’. Then another record-breaking movie called Sholay was released, which had a famous song ‘Holi ke din dil mil jate hai’. Definitely, Holi is all about joy, fun, happiness and playing with colors but don’t forget it also causes some problems for some people. Unwanted and undesired incidents can ruin the day. No doubt, Precaution is better than Cure. By taking precautions we can safeguard ourselves from these incidents.

Do’s and Don’ts for Holi

Wishing you a very Happy and Safe Holi! 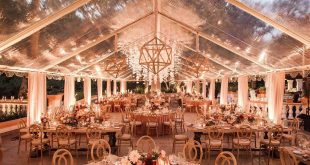 101 Guide on Event Venues and Occasions they can Host Plan Your 50 People Intimate Wedding At These Venues Share your requirements and leave the rest to us!